All of September, Rajasthani Food has been the buzz in the Mumbai eating out circuit. I got a chance to eat at and review the Rajasthani Food festival at the Hornby's Pavilion located at the ITC Grand Central, Lower Parel. Chef Kailash was flown in especially from ITC Sonar in Kolkata just to dish out impeccable delicacies everyday for the week long festival.

We started off with a quick introduction and tête-à-tête with Chef Kailash
who has been working with ITC Sonar for over 2 years and has served the royalty in the past with his authentic Rajasthani food. The more we got to know, the more excited we were to check out the spread for the evening.

Starters included Paneer Til Tikka, Malai Chicken Tikka and Bharwa Mirch. The Malai Chicken Tikka was tender and juicy, and the Bharwa Mirch was a lovely Fennel Seed dressed parcel of not-so-spicy filling which was a welcome change. I did not care much about the Paneer Til Tikka, but then that is mostly because I am all about fresh Paneer which is soft and melts in the mouth. But anyone who loves Deep Fried Paneer with Sesame would love it.

If you asked me what immediately comes to my mind when I think of Rajasthani cuisine, it has to be Dal Baati Choorma. I have childhood memories on gorging into homemade Dal baati with choorma and not many other versions have brought back those memories to me, not even the one at Dilli Haat in New Delhi. But this one did! Chef recommended also adding a little Jaggery on top and off went the forks and knives and the dish was enjoyed the right way - eaten with fingers.

I was on a high already but there was still a lot of stuff to taste, and among a wide selection of dishes, the most noteworthy I found was the Pitthod ki sabzi, which was something much like a Gatte ki sabzi, only 10 times better since it was softer. The Laal Maas was cooked to perfection but was a little too spicy for my liking, and the Chicken Curry was the super star. All this was tried along with a Sev ka Pulao, which was interesting in its own way.

Desserts included a traditional Ghewar with Rabdi and Laapsi. The Ghewar was soggy and the Laapsi was a bit too simple for my liking. The Ras Malai from the normal menu was outstanding though!

All in all, more than yummy food, it was a culinary learning session. I never knew there was so much more to Rajasthani cuisine than just the normal Dal baati and Gatte ki sabzi! Kudos to ITC for bringing home one cuisine at a time and show us how it really is!
Posted by Caramel Wings at 12:00 PM 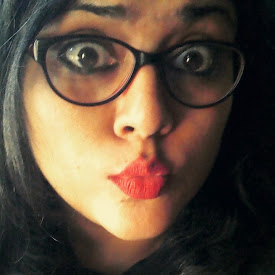